NHSBT uses cookies which are essential for the site to work. We also use non-essential cookies to help us improve our services, any data collected is anonymised. By continuing to use this website you agree to our use of cookies. Read more about our cookies
Hi there, we see you're using OS, why not try our app?
Download

A history of the development of our microbiology services 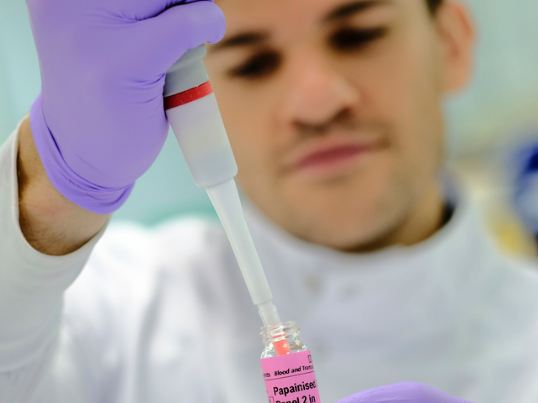 When the director of the North London Blood Transfusion Service at Edgware employed virologist Dr John Barbara in 1974 the hitherto unrelated disciplines of transfusion medicine and microbiology were linked. At that time, although syphilis screening was in place, the major microbiological threat to the blood supply was hepatitis B. Dr Barbara was appointed as Head of Microbiology at NLBTC working closely with Dr David Dane of the Middlesex Hospital, best remembered for his description of the hepatitis B virion in 1970, thereafter known as the Dane particle.

In those early days blood was screened for hepatitis B surface antigen (HBsAg), originally known as ´Australia antigen´, by use of the immunodiffusion technique. By 1983 John Barbara and David Howell in collaboration with Colin (Sam) Cameron of the Middlesex Hospital and Brian Cambridge at BPL had developed a microplate format radioimmunoassay for HBsAg.

This assay was used in the other transfusion services in England for a nominal fee of 20p per test. This fee was to satisfy the Board of Trade that there was not an unfair advantage over the commercial products in the market and was reinvested in the Service. By 1983 the significance of transfusion microbiology had been established and Dr Barbara published his book "Microbiology in Blood Transfusion" which placed the discipline firmly on the map.

At about this time the threat of the emerging disease AIDS was becoming evident in infected haemophiliacs and the testing of blood for markers of infectious agents had assumed major importance. The agent for ´non-A non-B´ hepatitis had been identified in the early nineties and testing for HCV commenced in 1991. The transfusion services had become a major source of epidemiological and surveillance data required for the accurate collation and analysis of these transfusion transmissible diseases.

With the reorganisation of the blood service in England, initially into three zones and then an integrated National Service, the role of the department changed. The Processing Testing and Issues (PTI) directorate became responsible for the routine donor testing laboratories. The Transfusion Microbiology Department became part of the Directorate Diagnostics and Research and the National Transfusion Microbiology Laboratories were formed under the leadership of Dr John Barbara in February 2000. In April 2001 Dr Barbara took partial retirement and Dr Roger Eglin assumed the position of Head of the Department. During the process of reorganisation five distinct divisions were created:

The department now plays a central role in the determination of the strategies and policies of the NBS with respect to the risks and prevention of transfusion transmissible diseases. The laboratories are heavily engaged with specialised reference work but also support the Service in special projects, centralised schemes, for example, national lot release testing of test kits.

In addition, ongoing developmental research continues to be an important activity.

Find out more about the work we do within diagnostic services.